I have reviewed several albums by El Cachivache Quinteto before, and this is the first time I've heard them perform with a singer.

Well, not one singer, actually - the album Alguien cantó features many names you'll be familiar with: Cucuza Castiello, Marisol Martinez, Limón García, and others.

Published in October 2021, this album contains ten distinct tracks, with the majority of them suitable for dancing.

Let's have a listen!

Quiero verte una vez más offers a "nuevo" interpretation that balances on a thin line between the dancefloor and a concert hall. There are numerous rubatos throughout the song, and the singer, Walter "Chino" Laborde, directs the whole show. I found the story compelling, especially as it gains momentum torward the end.

Yo no sé que me han hecho tus ojos is one of my most beloved valses. From Canaro's 1930 recording with Charlo, a singer who my estimation rivals Gardel, or Canaro's later recording with Arenas that you've probably danced to, all the way to the takes of Collective Tango Esquinas and Sexteto Andiamo. Love it.

The Cachivaches and Marisol Martinez take us back to the impossibly slow valses of early 1930s. At ~ 38 BPM, this interpretations is unsuitable for your regular vals tanda. It is very dreamy, nostalgic, and I would play it with a different purpose in mind than a vals: for a very, veeery relaxed nuevo-style dancing.

Destempo brings a couple of guitars to the show, accompanied by a double-bass and bandoneón, and then joined by the singer Limón García. It has a good tango beat and a comfortable tempo. I must find out where this song comes from; it's not present in the online databases, and I suspect it might come from the Argentinian folklore tradition. Nevertheless, I would find dancing to it easy.

Tú, el cielo y tú offers a surprisingly traditional take on the famous tune; besides the electric guitar, which is characteristic of the Cachivaches, the band and the singer "Black" Rodriguez Mendez "stay in the lane", so to speak. I found it charming, and very danceable.

Soñemos sounds unmistakably happy, as it should, and in this case also very simple, unpretensious, as if the singer Eliana Sosa truly had not one worry in the world. Compare with the more orchestral, showy versions from the 1950s by Roberto Caló c. Roberto Rufino or Carlos di Sarli c. Roberto Florio, and you'll see what I mean. It moves me to dance without provoking me to overplay the happiness of it.

Transnochando could use a little more work when it comes to its arrangement, I felt; it sounds somewhat hollow until the singer Cucuza Castiello joins the party. He carries the rest of the song on his shoulders. He's excellent and gives the song its due; I just wish the ensemble would've found more notes to play.

Regin is a slower, atmospheric piece from the nuevo tradition. Sung by Dolores Solá, it is initially a mysterious, then increasingly dramatic narrative with a regular underlying rhythm. While compelling musically, I did not find myself inspired to dance. Your conclusion might just as well be in the opposite direction, however; I think that in this case it's purely a matter of taste.

Amarras is a less-known tune recorded by D'Arienzo with Hector Maure, and some if its spirit is present in this arrangement. Optimistic and flowing in a comfortable tempo, this Cachivache cover should please all but the most conservative dancers. The singer is Ariel Varnerin, who previously recorded four D'Arienzo covers with Orquesta Villa Crespo.

La cicatriz is a milonga only recorded by D'Arienzo in the golden era, and certainly one that's a staple in a DJ's repertoire.

Just like with Transnochando, I felt the arrangement needed "more notes" and possibly also more "kick" if you will: I would love to be chased on the dance floor with an imaginary raging bull when dancing to this tune. The character of Cachivache's cover is less then enthusiastic, definitely less sharp and less driven than D'Arienzo's original, even as the singer Martin Tronzoco brings some much-needed energy when he joins. Admittedly, I am very particular in what I love in a milonga, so interpret this accordingly.

The final track is El sueño del pibe and it is an unassuming, slower walking piece. The singer Pacha Mendes sounds as if recorded from a distance, and I suspect this might be a live recording, which would explain this. I would wish the band to have a stronger opinion, in terms of the arrangement and execution, given that the bar has been set quite high by Pugliese with Chanel back in 1945. As it stands, I feel it does not provide a fully satisfying conclusion to this otherwise compelling album. This reviewer has learned that the singer is actually Maradona. Yes, that Maradona, and the song is meant to be a tribute to the great soccer player. The singing was reportedly taken from a TV recording, and then the band added music to it. Wow!

El Cachivache are a prolific band, one that is always busy creating and recording new music. I did not expect them to come out with a vocal album, and I am very pleased that they did. It's worth listening to, and most of the tracks will be perfectly at home at a milonga.

My favorites are among the more traditional arrangements this time: Tú, el cielo y tú, Soñemos, and Amarras. And I will look for the right moment to play some of the others, especially the vals Yo no sé que me han hecho tus ojos.

With this review I am back from my extended tango sabbatical. Ironically, another break might be forced upon me as the God-forsaken COVID has just exploded again in Czechia, and I am not confident that the new government will avoid the temptations of yet another lockdown. One can always hope. I guess.

Tango Gitano brings the smaller version of Roulotte to the stage, and maybe the expansive orchestral sound of "El Siguiente" and "Muñeca mecánica" is never coming back. Rather than do covers, this time they deliver a fresh batch of tangos penned by the band-leader Gaspar Pocai.

Mini-review: Tangos in English by The Alex Krebs Tango Sextet 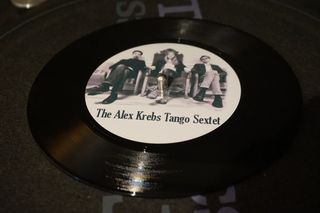