La Auténtica Milonguera is a fairly new ensemble from BsAs and they've released their first album a few days ago. Included there are five songs, five sweet songs that tease you and leave you wanting more.

Here are four of them, courtesy of the band that has published them on YouTube:

Their sound is rounded, soft, and pulsating gently to drive the ronda. All five tunes are perfectly danceable.

I liked the arrangements a lot. They are respectful to the tradition without trying to clone the originals. You should recognize the tunes easily.

The rhythm is consistent and there are no tricks to be played on the dancers, resulting in a predictable flow on the dance floor. You get from point A to point B in a clear, linear fashion.

If I should describe the overall feel I get, it would be "pleasant" with ingredients of "gentle" and "composed".

Out of the five tunes, El cielo y tú has the hardest job to convince me as the canonical version comes from the legacy of Carlos di Sarli canta Alberto Podestá. Here, it's a pleasant duet of Marisol Martinez and Jesus Hidalgo. It's professionally executed and overall very pleasant.

El abrojito is best known from the recording by Osvaldo Pugliese c. Alberto Morán. It comes out very differently here, and that's a good thing. La Auténtica with Marison Martinez do not try to out-Pugliese it and perform it gently, with only occasional hints of Pugliese idiosyncrasies.

The third song, Más solo que nunca, has three Golden age recordings, all from 1944: those by Láurenz c. Carlos Bermúdez, Canaro c. Carlos Roldán, and D'Agostino c. Ángel Vargas, all great. The band with Jesus Hidalgo delivers a clean, unhurried rendition that is easy on the ears and feet of dancers.

You'll have heard Cada vez que me recuerdes as recorded by Troilo c. Fiorentino or Canaro c. Adrián. Both have a certain sense of urgency that is to a great degree restrained here. Marison Martinez delivers a smooth, noble interpretation.

Tu angustia y mi dolor translates to "Your anguish and my pain" and it's a fairily desperate affair as recorded, twice, by Alfredo Gobbi: once with Tito Landó, once with Jorge Maciel. La Auténtica felt no need for overbearing drama; Jesus Hidalgo gives it just enough lyrical charge and the song, while a bit slower than the rest, flows casually from beginning to end.

Marison Martinez has recorded with Orquesta Romantica Milonguera and a few tunes with Orquesta Típica Andariega. She's the same everywhere, very clearly identifiable. The orchestras could not be more different, though.

When Romantica Milonguera does it, they go all the way, in terms of musical expression, all the way up to the cliff, and then they jump off it. It's always maximally exposed and each phrase that can be exploited is exploited ruthlessly.

The Auténtica holds its enthusiasm in check. Even with Tu angustia y mi dolor they did not let go. They are lyrical but restrained.

That means that as a DJ, I can use La Auténtica anytime, while I have to be careful with Romantica in terms of what energy it brings to the dance floor. On the flip side, when I need to really "cook them", then Romantica can do that, yes.

The Andariega has plenty of energy, too; their claim to fame, in my view, are their unique arrangements and interpretations. Just look what they did to Trenzas, and that's not the most extreme example.

The arrangements of La Auténtica are more traditional, unsurprising, although definitely not trivial. As a DJ, I can use them with less risk than Andariega, which I fear could bring the ultra-traditionalists our of their emotional balance... but perhaps they need that, sometimes.

I am pleased that the trend of new danceable tango music seems to retain momentum. This group adds a new promise as it seems to be fully devoted to the milongueros. Indeed, an inside source whispered to me that there are milongueros among the musicians!

To me, it's also useful that the band performs with singers. That might sound trivial but whereas the Golden age repertoire is predominantly vocal, most of contemporary groups record primarily instrumentals. I like to use those, too, in my sets, but vocals are indispensable. We connect with the singers emotionally more than we do with just instruments.

Hopefully this is a promise of more to come in 2020 and beyond. 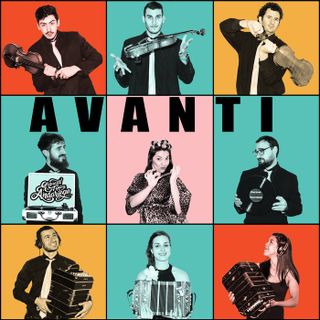 Have you heard? Andariega has a new album out, Avanti. And it features Marisol Martinez, whom we know from her collaboration with Orquesta Romantica Milonguera. Andariega remakes old tunes with varying degree of fidelity but always with care and precision. And they care about dancers all the time.