Holy cow! The Cachivaches made a new release, and I missed it! It would pass me unnoticed if it weren't for YouTube's algorithms, who suggested this video of their rendition of Gloria, where a woman dances alone as many do, today:

The album, poignantly titled "Tiempos Extraños" (strange times indeed), and contains 9 tracks. Four of these are original pieces, the rest are covers. Except for Rosario, which seems to be intended for listening only, they inspire me to dance, if only in my head in these Corona times.

The opening track is Requiem para Beto: slower, meditative, with a pleasant melodic content. The music shares the spirit of Tango del infinito from their earlier album "Lujo y Fantasía".

La maraña is a more complicated affair. The main theme is accented and supports a good swift walk, the alternate theme is melodic and decidedly slower.

Varela Varelita is straightforward and swift from beginning to end. Its accents are excellent and it will propel you forward with a positive charge. I don't know if its name suggests any association with Héctor Varela, because musically there doesn't seem to be any. This is an uncomplicated, optimistic tango instrumental for the 21th century.

*Marión *is first of the five covers. Some of them are truer to their canonical versions than others (Marión even has some of Caló's signature riffs) and if it weren't for the electric guitar, you could call them conservative. They are all pleasant, though, with plenty of potential for the dance floor.

I especially enjoyed the opening solo of the electric guitar in La noche que te fuiste. What follows is a more relaxed re-take that doesn't have Caló's urgency and often sits down, tempo-wise, to inspect and play with the melody.

Al verla pasar has some of Láurenz's nervousness and plenty of forward-moving drive. Cachivache already did a cover of No me extraña on their previous album, and are very convincing here as well. I would very much enjoy having a four-piece tanda of Láurenz covers by the quinteto for my sets. Perhaps it's not too much to ask? :)

Junto a tu corazón departs from Di Sarli's decidedly lyrical take and is sharply accented, moving regularly until approx. the 2 minute mark, where the quinteto takes a break and enjoys a quieter lyrical moment.

Finally, there comes Gloria. In Prague, I most often hear this piece from the 1952 recording by Racciatti with Nina Miranda. In my estimation, the Cachivache retained the character of this version and enlivened it for the contemporary audience. It belongs to my top 3 favorites of this album, along with Requiem para Beto and Varela Varelita.

The album is  available for purchase at the Cachivaches' website. As I keep saying, the best way to support our musicians is to buy their stuff! This album is worth your money and attention. 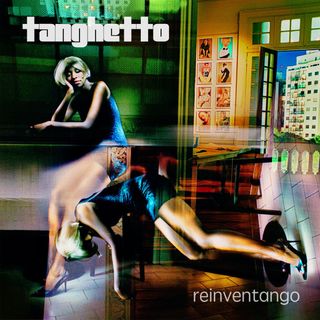 I give a mixed review to the album Reinventango by Tanghetto, which is by all indications a solid collection of neo-tango music, with only some of them having a detectable dancing appeal.