Time to take another trip to the territory claimed by Neo-Tango, one that I have so far not mapped out in detail. The occasion? The 2019 album Tango Animal by the group San Telmo Lounge based in Rosario, Argentina.

I have used their music in my progressive mixes, and it generates mostly positive and very melodic vibes. Having revisited their Bandcamp home, I realized it was missing in my library and promptly purchased it. It sat in my Inbox a month or so, and now is the time to look at it.

This won't be a proper review as I feel I am not yet ready to say anything final on the subject. Mostly impressions and gut feeling. As I wrote in my notes to the album Acostumbrarse no es bueno by Lilí Gradés, I need to get to know a lot more post-2010 neo-tangos to build the proper context.

First of all, I am not convinced I should box this into the "Neo-Tango" category at all. The instrumentation is acoustic as far as I can tell. I will only do so to take a shortcut, and also because the music clearly comes from a different background than contemporary tango does, stylistically, melodically, rhythmically, etc.

There is a remarkable consistency to the overall sound of the album, perhaps thanks to the fact that all the music was composed and arranged by the bandleader, Martín Delgado. Or is it because it was produced by Acho Estol (of the "La Chicana" fame), as the album description says, and he molded it to his unique form? I don't know.

This consistency does not imply that the songs sound the same. Not at all. If there's one aspect I really like about this band, it's how they work with melody. Most of the tracks are pleasant, some cheerful, others a bit weird (weird as in Austin, not as in "creepy"). All will please your ears with opinionated, non-trivial melodies.

Will they also please your feet? I haven't tested them yet apart from my progressive mixes, which have been produced amids the COVID tango shutdown and not yet verified on dancers.

The tempos don't suggest that a traditionalist milonguero would find himself right at home here. The opening Larvario, for instance, is a sort-of vals but with BPMs around 45. It has a certain circus feeling to it, with the glokenspiel and fliscornio (some kind of a trumpet) joining in. Me personally, I like valses above 60 BPM and preferrably 65+ but I can imagine a more open-minded dancer will be quite happy with this otherwise memorable and melodic vals. Plus it only runs for 2:22 - doable.

I didn't quite get into the right mood with Cerdos. Featuring heavy beats and lots of electric guitar, it evoked a "rock" feeling in me, and I find it antithetical to tango. If I listen to it as a rock song with no ambitions to dance to it, though, I can enjoy it just fine.

Buitres is a pleasant melodic chill-out (one of the most overused terms I use in my DJ comments to the tracks I have), flowing at almost 40 BPM and telling a compelling story. At 4:48 it's quite long, and so I'd be careful when considering whether to drop it into the set or not. I can see its potential, though.

Gato moves the needle up to ~ 42 BPM, and is a charming slow walker with a perfect length of 2:21. I felt that when dancing I'd have to alternate between the normal and double tempo, and this is true to many other tracks not just on this album - given a normal walking beat of 60 BPM, doing 40 consistently would be tiresome but the music does not really suggest the double tempo overall (like a slower milonga at 84 BPM would), and so you have to be on a lookout a phrase that allows for it and apply it from time to time.

Gallo drops the tempo too low to lay any claim on danceability. A rather long, melodic, and mostly static song, it's only there to please your ears.

Perhaps the most "weird" (in a good way) is Amores Perros, a 5+ min. long song with a very circus feel to it (a recurring theme here) with all the wind instruments joining in. I found it at times comical, at times engaging, and often somehow reminiscent of the Balkans - not yet sure why. Again, at five minutes I wonder if it's too much for dancing? The tempo is at ~ 51 BPM, so quite slow, and long and slow don't work so well together on the dance floor. That said, it's a lot of fun with just your headphones on, sitting in a chair.

Leona is a beautiful canción. I loved the interplay of the cello, violin, and the singer here. It flows at nearly the normal walking beat (~ 55 BPM), and yet somehow I don't feel the dancing drive to be present. It's all very rounded, smooth, without regular accents giving guidance to the leader. I think I'll keep this one for listening only.

I found Hiena to be lively and engaging, despite its nominal tempo of ~ 50 BPM. Putting in some double tempo with your feet won't be much of a challenge. There's a lot going on here, and it's one of the highlights of this album for me. Also its length of 3:34 is just about right. I will use this someday.

Finally, Mi Zorro. Being the only track that flows at the normal walking beat (~ 62 BPM), it could be most readily adopted by dancers less used to "nuevo" milongas. The theme is catchy and as the band elaborates on it, there are plenty notes flying around, with some phrases thereby suggesting double tempo. Again, a lot going on here.

I have enjoyed this album without reservations, perhaps because I did not expect to be served a menu of straight-to-the-dancefloor courses. For consumption with your headphones in a sitting position, it's a wonderful selection of music that defies easy characterization but is always melodic and pleasurable.

The band's singer, Laura Cardini, is a joy to listen to: charming and soft but with depth.

There's a couple of tracks that I would like to use in my upcoming mixes and in live events once tango returns and I can organize and DJ again. I would consider Buitres, Gato, Hiena, and Mi Zorro.

If you like it, too, make sure to head over to Bandcamp and support the band by purchasing their music. I purchase all the music I review, and link to Bandcamp rather than Spotify whenever I can. The artists needs us now more than ever. A new live album by Solo Tango Orquesta just came out. Have a listen! 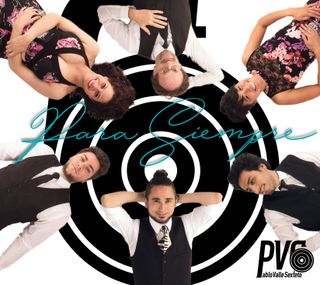