At the time of writing, my library of neo-tango music is pitifully small. Yes, there are Gotan Project albums, some Tanghetto, Otros Aires, and compilations made in the early 2000s. Not much with a timestamp more recent than 2010.

I was led to believe that the genre itself has disappeared, judging by how we used to love Gotan at the time when I joined the scene in 2011 and how rarely I've head it played since.

The other, more plausible explanation would be that I largely ignored the genre and stayed in the classical lane between 2012-2018, both as a dancer and a DJ.

Nowadays, as I experiment on a much larger and variegated canvas, I have a lot of catching up to do. And so this review represents that, as an entry in my diary, lacking in much-needed context but hopefully still useful.

The artist is Lilí Gardés and the album Acostumbrarse no es bueno, published in 2018 and available on Bandcamp as well as on the streaming platforms. 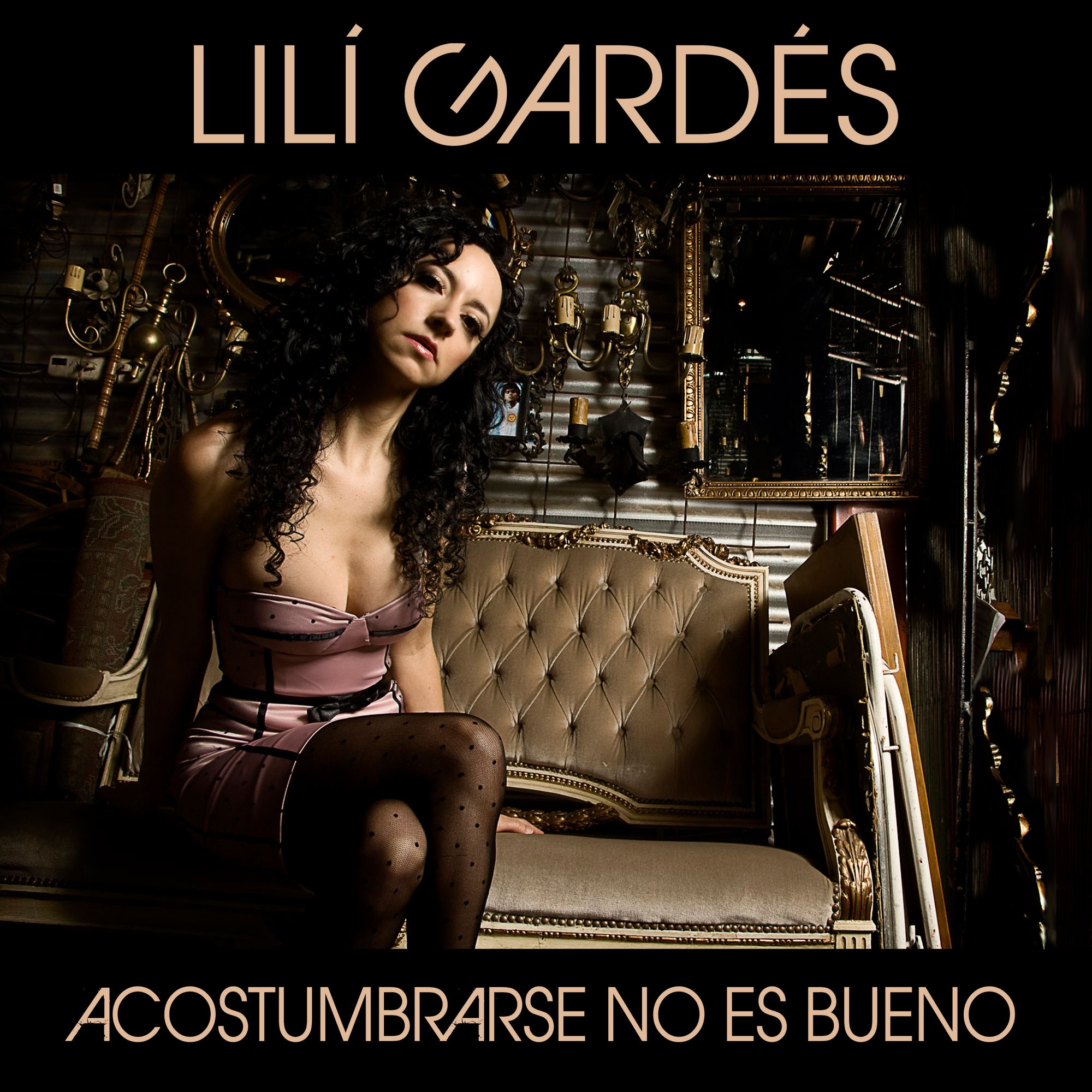 First, how I approached this review - the same as I approach any other album with music I would potentially want to play at my milongas. I am interested in music that can inspire standard tango figures, regardless of style (milonguero, nuevo).

This is easiest with the Golden Age recordings, when this genre was defined, for better or worse. Many but not all contemporary bands also pass this bar, depending on how eager they are to please the milongueros. As long as they keep the tempos in the reasonable walking-beat range, don't overdo it with rubatos, aim at 2.30 - 3.30 minutes per song, it's not a high bar to clear.

With neo-tango and non-tango music, however, this is not an obvious task at all. Unburdened with the tango tradition, they often have phrases structured in the 4/4 beat and no matter how you slice the music, you often don't get the same walking tempo you need for the normal tango movements.

Bear this in mind if you see me contemplating the BPMs later on.

I also think that certain beat patterns, accents, phrasing is more conductive to tango movements than others. We don't just jump up and down and wiggle our asses repetitively; there's as much need for the "empty space" (silence) in a tango phrases as there is for notes (sounds). This could be further analyzed and demonstrated with sheet music examples etc. but I am not writing my PhD thesis here and nobody would read it anyway: suffice to say, I'll stick to giving examples that you can evaluate yourself by listening or dancing.

It's not obvious that you can or should be able to find these beat patterns in non-tango music, and as far as I am concerned, they are not reliably present in the neo-tango genre either. The former was not composed for the tango dancer at all, and the latter, even as it claims as stake in the tradition, ends up fighting it instead.

With these caveats out of the way, let's approach this album and find out what it has in store for us progressive milongueros.

Lilí Gardés is, first and foremost, a wonderful singer. The color of her voice is pleasant and smooth, her intonation confident.

Looking at the booklet, I see that all the arrangements come from the band member Osi Tejerina, and you do get a sense of consistency throughout the album. The arrangements are non-trivial, rich and varied. Each song has a distinct idea, and unlike many neo-tango tunes I've heard, the band does not just repeat it all over but develops it in the standard song form (theme/chorus).

Simply said, this is a well-produced album of pop music that has bandoneón in it and the question is, what's its dancing potential?

How I judge the danceability

The caveat is that I'm counting as if the songs were phrased in the 2/4 tango beat, but they are more likely phrased in the 4/4 beat, and then end up with 120 BPM and 90 BPM respectively.

You can just do half-tempo and 120 BPM becomes a comfortable walking beat. However, 45 BPM is too slow for tango and 90 BPM is too fast (milonga territory).

How should the dancer decide what tempo to adopt? Usually, the bass instruments suggest it. Here, it's percussion instead. When you hear the same beat one after another, that becomes the temporal baseline.

For example, in Tormento, a neo-tango / pop arrangement of a tango song first recorded in 1934 by Canaro, the beat is monotonous with no emphasis on the 1st and 3rd note in the bar, and so the dancer would conclude the tempo is 90 BPM and not 45 BPM.

As a contrary example, consider No pidas perdón. While the percussion is likewise quite monotonous and all beats are created equal (most of the time), there are passages where you'll hear the accents on the 1st and 3rd beat, provided by either synths or the bandoneón, and so the dancer can settle on the swift but comfortable 64 BPM tempo.

I spend so much time discussing the tempos not just to satisfy my OCD: try dancing a vals on a recording that's far too away from the normal walking beat (try it!) and tell me it how it felt.

Besides that, what else did I look for?

In no particular order:

The question is, when the music moves you dance, what kind of moves does it inspire you to make? And so that leaves the elephant in the room, which I've already hinted on several times, and that's the overall character of the music. It is certainly not tango. It's pop, with bandoneón. It does not inherit from the tango phrasing, musicality, or temperament. This is true to most of neo-tango music and that's where I as a progressive but still tradition-minded DJ struggle, as you can see.

Let's agree on a compromise: either you are more traditional than me, and want the music to spring directly from the tango tradition, and then perhaps this album won't prompt you to dance at all, or you are more progressive than me and are wondering why I am performing this mental torture upon myself, because of course one can dance tango moves to anything! That way we leave the decision on how danceable this is to you, and we can finally move on to the music itself, 1200 words after getting started.

The songs in detail

There are eleven tracks on the album, and I liked all of them. The quality is remarkably even throughout. If anything, I liked the music more and more as I listened to it, with my favorites being the last two: Quién será, and La última noche.

The first two tracks, Arrabal and Desde el balcón, are swift and catchy, with the former being more optimistic - but regardless of tonality (major vs minor), the mood is quite similar. You're probably going to choose the half-tempo to be at the comfortable 60 BPM but the phrasing is going to urge you to catch up and speed up when you can.

Acostumbrarse no es bueno is one of two tracks that you won't fit into the normal walking beat; either you do 45 BPM or 90 BPM. It's a pity, because musically speaking the theme is likeable, even catchy, and so perhaps you can try dancing it as a slower milonga?

No pidas perdón is more straightforward: swift but easily manageable at 64 BPM, wit the phrasing and accents helping this interpretation of the tempo. It will drive you from start to end with no noticeable dips or peaks, and it's mostly optimistic or at least uncomplicated as any other good pop song.

Ay corazón makes you choose between 50 and 100 BPM for making your steps, and especially the phrasing of the chorus suggests the former, which would make this a somewhat slower walker. This is no chill-out piece, however, it's quite urgent and driven.

I can't find much to say about Quiero oír tu voz; it's energetic, you can move to it on the normal walking beat but the phrasing will push you to the double tempo. and other than that... It didn't stick to me as much.

Abrazame y bailemos happens to be the only chill-out piece on the album, instilling quiet, introspective mood while keeping a steady beat. I reckon the dancers will choose to keep a comfy walking beat of 57 BPM and occasionally drop to half-tempo to enjoy slow rotating movements.

Todo se vuelve a repetir is nominally on the same BPM, but the agile, busy drums will move dancers to switch to double-tempo instead. I found the melody captivating and memorable. The song has a constant drive throughout with just one passage where you can relax.

I mentioned Tormento above in the section about tempos. It's funny how the motive composed by Charlo in 1930s could be remade into a contemporary pop song (this is the version with Charlo singing and you'll notice that unlike Galán, he's pretty liberal with the rubatos and that's why you won't hear Charlo much at milongas). While I liked the pop re-rendering of the tune, I was left wondering what to dance to it - the up-and-down directions suggested by the drum line distracted me and while the tempo would be suitable for a slow milonga, there are no milonga patterns to latch onto.

Quién será is my favorite, a slower, nostalgic piece that has somewhat more energy than Abrazame y bailemos but could also be danced to in a relaxed, chilled-out manner. I found the musical phrasing to be very conductive to slower tango figures.

Finally, La última noche. Another favorite as I found myself humming along its theme when walking my dog. It's quite sticky. I felt this would perform well as a midtempo melodic walker.

There is much to like about this album, regardless of whether you'd want to dance to it or not. It's pleasant to just listen to, and I found several tracks to have the potential for my progressive tango events, hopefully resuming again this year once we can meet in public spaces again without a rug on one's face.

My dancefloor candidates are Abrazame y bailemos, Quién será, and La última noche. I would most likely mix them with other bands within a tanda for variety.

Whether or not this musical genre represents the future of tango is an open question. I am personally much conflicted when trying to come up with an opinion as you might have guessed. Thankfully, it's not up to me but up to the musicians and dancers themselves. We live in a very different era than the people living in BsAs in 1930s and 40s and the music reflects that. It must.