Have you heard? Andariega has a new album out, Avanti. And it features Marisol Martinez, whom we know from her collaboration with Orquesta Romantica Milonguera.

These two Argentinian orchestras present very different approaches to tango tradition. While Romantica goes all-in on every phrase, over-emphasizing and overdoing and over-kitsching in its lovely way, Andariega goes the other way.

They remake old tunes with varying degree of fidelity but always with care and precision. They come up with original compositions of their own. Most importantly, seem to care about the dancer all the time.

The arrangements by Luigi Coviello, the band leader, punch many holes in the fabric of well-known tunes, as if spraying them over with a submachine gun. Then, he patches the holes and paints over them with unfamiliar patterns.

Margarita Gauthier, for example, is unrecognizable from the canonical version by Troilo. There are hints of the tune's signature here and there, but overall, it's very much a new composition. It stands on its own even without a singer, compelling the dancer to venture into an unexplored territory. An adventure beckons.

Trenzas, opening the album, is truer to the original while by no means a slave to it. Martinez delivers a powerful lyrical statement, and the orchestra supports here with more legatos than usual.

She then goes on to sing on Un giorno ti dirò, a tango arrangement of this lyrical gem. I find it very convincing.

Her last appearance on the album is on Al compás del corazón, which Andariega already recorded as an instrumental. I strongly prefer the vocal version. The orchestra is doing many staccatos and shoot through the melody with abandon; it's Martinez who is in charge of delivering the theme.

If there's one charge I'd have against Andariega, it's that they are using singers too sparingly. In many recordings, a singer would help bridge the gap between an innovative and sometimes alien arrangement and the expectations of the more traditionally minded dancers.

No matter how hard I try, I miss the singer in Remembranza. Not because the arrangement is sparse or boring: quite the contrary, they sell you plenty of notes. My inner traditionalist just wants to realize the lyrical potential of this song while dancing to it, and that is very hard to do  without a singer.

I could say the same about Mañana zarpa un barco, catchy and attractive as it may otherwise be. Or with Solamente ella, although there I'm already on the fence as I love the instrumental rendition by Alex Krebs, and Andariega shines here, too, albeit in its own way.

Enough of my complaining, though. I respect the artist and the path they've chosen. And one should probably respect it even more when they contradict the established assumptions, as long as the creation is not self-evidently narcissistic.

The album contains a few original pieces, of which I would like to highlight the eponymous Avanti. It showcases most of Andariega's idiosyncracies and is at the same time playful and lyrical.

The inclusion of instrumental covers of Buonasera and Lontano valses, which they have recorded on the previous album Andiamo with the singer Fabián Villalón, is welcome should a need arise for an instrumental vals tanda; that said, I am enamored by the vocal versions and will not give them up.

One last note goes to the milonga Ella es así, which closes the album. It is by far the most original rendition I've heard to date: very playful, very original, very Andariega. So much so that I don't yet know what to mix it with, and I do want to play it for my dancers soon.

This album has ended a drought of new tango music releases on Bandcamp, and I should add that while you can listen to it for free there in its entirety, you should buy it if you like it. I purchase all music that I review here, and then some I don't review beause I end up not liking it so much. The artists need our support. 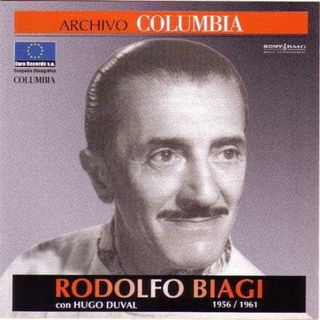 I think Biagi is a good gateway drug to the 1950s. If I were to nudge a recalcitrant "traditionalist" towards newer music, I could very well start with this album.