Bandonegro hails from Poland and is well-known in the milonguero circles at home and in neighboring countries.

I have enjoyed dancing to them playing live, for their arrangements and overall style is friendly to dancers of all levels.

This statement applies to their new album - Color Aires - released on September 30, 2022, although not without caveats, as we shall see.

Their choice of repertoire could be seen as conservative. Even ultra-conservative, since most of the tracks are of the "hit" variety, tracks you would hear on many milongas. The one nuevo track I had to look up in the database, A mis viejos, is the sole exception.

I'll cover the songs in a different order than how they appear on the album and see if we can make tandas here.

This is easiest with the milongas: we can dance to Silueta porteña, No hay tierra como la mía, and Reliquias porteñas.

All three, as well as the valses that will follow, have very traditional, milonguero arrangements. They won't surprise you but will surely delight you as you dance to them. The tempos are just right; the beats are regular and propel the couples on the dance floor.

Next, we have two valses: Desde el alma and Palomita blanca.

Too bad there isn't a third one! A quick look at the two earlier albums, the debut Tanchestron (2017) and their "pandemic nuevo album" (my term not theirs) Tangostoria (2020) reveals no valses either. We'll have to wait some more to complete the tanda, then.

These valses are spot-on just like the milongas. Solid, dependable, unsurprising. And that's what you want on the dance floor: neither milongas nor valses permit dangerous experiments that could ruin the flow, whereas in tango, you have a lot more room to stretch or compress your phrases yet keep the dancers in a good ronda.

Let's turn our attention to the tangos. We have four, but you couldn't make a sensible tanda out of them, which is fine, of course: there are other tangos on their earlier albums we can use for that.

Felicia is on the faster end of the spectrum. I've got 20 different versions of the tune in my library, and only the one by Solo Tango is faster. If you wanted a fast tanda, you could open with El huracán (Tanchestron), add Felicia from this album, Loca from Tanchestron, and then Este es el rey from Tangostoria to finish off your dancers.

Alternatively, start with El puntazo (coming up next), then Loca, then Felicia, and keep Este es el rey for the closer (where else?)

El puntazo is one of those songs you would play when you need your dancers to punish the floor truly hard, and it works great as an opener to such a tanda.

Master D'Arienzo set the bar really high with this one, in my view anyway. The same can be said about Loca or Este es el rey, and no matter how hard the bands try, they seldom reach it.

Did Bandonegro also fall short? I wouldn't say so; they did their damnedest to re-interpret the piece in a way that does justice to the original. Which is to say: it is a fine cover that pays homage to the original without trying to overtake it.

La cumparsita, appearing last in the album but not in this review, falls into the company of faster, more agile "cumparsitas". The interpretation is lovely, adorable even: it starts and progresses true to form. Gradually, it builds up more originality in the phrasing and expression. By the time it ended, I was utterly in love.

We are about to cross a bridge from the milonguero section of the album to the other one, that I (perhaps reflexively) call "nuevo."

It starts with a track that I did not expect to serve this role: Canaro en París.

The first 100 seconds of this suggest we'll get a "milonguero standard" interpretation that is on the more lively spectrum but nothing extraordinary.

Then, the band takes a detour for about 30 seconds, basically stopping the beat and letting the violin meditate for a while.

When the beat returns, one would think: fine, they had their moment, and now we can go back to dancing.

This is only true for a while. The band spends the last minute in a virtuoso deathmatch that transforms the song from a regular dancing piece to an over-dramatized concert performance. The ending is then completely over-the-top ridiculous. Like... I mean... what the fuck?

Or, am I too much of a square? As a closing tango in a late-night tanda for a hyper-energized crowd, this could very well elicit thunderous applause. Who am I to tell?

One way or another, Bandonegro's Canaro en París took a sharp departure from the canon, and stands at the border crossing between the milonguero land and the nuevo-stan.

A regular reader already knows what I am about to say.

Concert tango is a genre that I do not understand and will not entertain.

The album has four tracks of this sort: La bordona (do listen to Troilo's definitive version from 1958, that's the one you want), A mis viejos (also recorded by Troilo, in 1963), A los amigos (Pugliese recorded this in 1960, among others), and Piazzolla's Zum.

The band took an obvious pleasure recreating all four, and did a tremendous job at that. You can listen to them if that's your persuasion.

I would rather dance.

Full disclosure: I received a preview copy of the album prior to its release, and did not purchase it with my own money as I do customarily. I want to both thank the band for this and also encourage you to do what I would otherwise do, and buy this album!

The dancing tracks are fabulous, and who knows, maybe you do like to listen (or even dance!) to nuevo, in which case this becomes a 100% win for you. 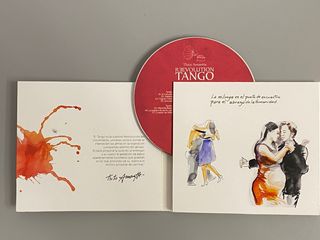 It's hard to imagine tango without the bandoneón. And yet we don't just have to imagine it, we can see what happens when it's replaced by the venerable accordion. It's key to the sound of Thito Amantte and his band. Here, I review their first album release, Reevolution.