When I heard the Polish band Bandonegro play live for dancers in Görlitz, everyone was love-smitten and the dance floor was always full during their sets. This quartet can generate the sound of a much bigger ensemble, and when they play for dancers, they aim to please their feet as much as their ears.

Their second album Tanchestron from 2017 captured much of the spirit with which they play live and not just a few tracks from it have appeared in my sets. And so I was giddy when I found out that a new album, Tangostoria, came out recently, in October 2020 to be exact.

Just like their fellow travelers Quinteto Ángel, they recorded it during the dry months of Covid-induced tango shutdown. Whether that had any impact on the orientation of the album, I have no way of knowing. Compared to Tanchestron, however, it aims at dancers less directly, keeping one leg on the dancefloor and stretching the other into a concert hall.

I have made it clear over the last few seasons of this blog that I don't particularly care for concert-style tango. In fact, I find listening to music that isn't made for dancing tedious. It is for this reason that I won't do a full review and will only focus on the songs that moved me to dance. That is not so much a judgement of the album that is masterfully made but rather a confession and self-acceptance of my bias.

The Uruguayan vocalist Andres Martorell joined the band in collaboration in six of the twelve tracks. His performance is notable for its clarity, even temperament, and a certain aristocratic flair. I imagine he would look really good in a tuxedo as opposed to, I don't know, Limón García, who sounds like leather jacket, jeans, and tattoos all over the place if you allow this rather strained analogy.

Sur, the opening track, represents the many sides of the album. Its authorship goes to Aníbal Troilo, who recorded it in 1948 with Edmundo Rivero. In those years we already hear Troilo moving away from simpler Golden Age phraseology toward his latter, more narrative driven period with ample rubatos and side-quests in every song.

Bandonegro went further in their interpretation, and plays loose with the tempo, often stopping the walking beat and letting the singer linger on the phrase. It is closer to a canción that Troilo's version was. There are enough passages when the beat resumes, however, and I think it's therefore usable for dancing for that moment when its contemplative mood and beautiful melodies can make the right impact.

Troilo's Desencuentro, immortalized in his recording with Roberto Rufino in 1963, is dated long after the Golden Age turned into the (much less appreciated) Silken Age. It has a complex narrative arc with many peaks and valleys with the singer the dominant story-teller and the dancer at his mercy.

I would say that Martorell can keep the leaders in line as he is very clear and somewhat predictable (in a good way). Not as forceful as Rufino was, he plays with the phrases with decisiveness - once he arrives with the beat, the direction is clear, he wouldn't pull the rug from below you. I would be happy to throw this one into my sets, with premeditation.

In La viruta, Bandonegro turns its focus fully on the milongueros. The instrumental flows regularly with the normal walking beat, with a lot of "yum" accents, and the arrangement is clever without crossing over into the unintelligible. There's a lot of tension, much more than, say, in the Biagi's version from 1948, and that tension is only resolved in the last possible moment. An instant favorite.

I don't know what possesses so many bands to record Este es el rey, an iconic D'Arienzo tune written for him by Carlos Ángel Lázzari and originally recorded in 1971. I have in my library six covers from the last decade, and there's gotta be many more I don't. That recording is borderline insane and it is nearly impossible to go even further without remaking it as a parody. And it's character is so clearly defined that if turn the insanity volume down, the result is rather meh. It just won't work as a laid-back walker.

Bandonegro know that, and they follow in D'Arienzo footsteps. On the hand hand, they nailed the drama, the tension, the explosiveness - it's all there as well as the heart-tugging violin playing counter-point. On the other hand, it's still a quartet, and I feel that size matters, here. For me, this tune needs a bigger ensemble - but why don't I contradict myself instantly and admit that I love the interpretation by Tango Bardo, a trio (can you count to four? - ed.) But hey, those guys are even more insane than D'Arienzo himself.

I rarely play Este es el rey for dancers, but it can kill if you get the moment right. I remember one crazy night in Belgrade in 2016 when I danced to it with a lovely Serbian lady, thinking in each moment that we would plow through the ronda like a double bulldozer, and miraculously enough, we haven't hit anyone.

Más grande que nunca is another instrumental by Carlos Lazzari & Enrique Alessio, recorded only once by D'Arienzo in 1958. I confess I haven't heard the original until today. For what it's worth, it's a fairly straightforward walker with plenty of energy and drive and is still sane.

It pleases me every time I hear a relatively lesser known tune brought back to life in recent years, and I give Bandonegro a lot of credit for this one. I think they captured the essence of the song with precision: it's swift, relentlessly driven, and should please the milonguero who needs to punish the floor and enjoy some hard beats.

In Remembranza, Andres Martorell returns after a cigarette break to re-tell this very compelling story once again. I was surprised to find this song suits the quartet so well, expecting myself to yearn for a fuller orchestral sound. It captivated me for the full four minutes nineteen seconds it lasted, which is another suprise - 4:19 would normally stretch my patience to its limits. Then again, I only danced in my head, so to speak, and so I wonder how it would work in a milonga. I intend to try some day.

And here, my friends, I conclude my review, prematurely and hesitantly but conclude it I must. The rest of the album has beautiful music made for listening, starting with Malena - here my surprise was most painful as this song was decisively intended for dancing but not here, and continuing with various covers of Piazzolla and Salgán, in which I did not expect any nourishment for my feet and didn't.

I encourage you to pick up where I left off and listen to the rest of the album on Spotify or wherever you can. The musicians shine in each phrase and have moved me, musically. Just not my body.

There is only so much fame and money that musicians can make off the milongueros, and pretty much nothing since the early 2020. The albums are perhaps the only way for them to stay in contact with their audience now, although I fear that direct album sales make for lunch money, maybe, with the streaming services having taken over.

Looking through that lens, I can hardly blame any band that turns away from the empty dance halls and tries to find a new audience, and I clap extra hard when they don't. Is Bandonegro such a case, though? No - their first and third albums were Piazzolla covers, and so they are being what they've been all along. It's just that my prior perspective was molded by their milonguero album Tanchestron, which is why I am the one who is re-adjusting.

One day the dance halls will fill up again and I am optimistic that Bandonegro will again play for us dancers with gusto just like I've seen them do in Görlitz. Until then, be sure to visit iTunes or Amazon or get the CD directly from them if you like what you've heard. Handing over hard cash for albums might be old-fashioned but is in my estimation still the best way to support our musicians.

Let's have a look at a new album by the Dutch tango ensemble Walton/van Duinen. 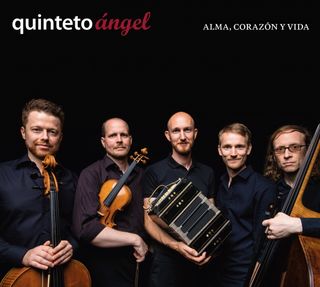 I review the album Alma, corazón y vida by Quinteto Ángel that came out in February 2021. It has songs to please the dancer as well as music for the appreciative listening audience.