Cuarteto Soltango just released their fourth album, Misión Tango. I reviewed the last one two years ago and was impressed. That's why I went ahead and bought this one on iTunes without any hesitation and without previewing it first.

I like German bands: Sexteto Cristal, Quinteto Ángel make frequent contributions to my sets, and so do Soltangos. Their technical prowess is top-notch and more often than not, they play for dancers and not just listeners.

SolTangos have a violoncello in place of the double bass, which gives them interesting possibilities: the cello can supply the bass lines but also contribute to the melody. They take advantage of that numerous times.

Misión Tango brings forward 21 tributes to various orchestras of the past. The covers go well beyond El choclos and La yumbas that you hear so often; in fact, the band has resurrected many songs that only have one or two historical renditions. That alone is a reason to lavish them with praise.

The following are my notes as I listen to the album, which you can also stream on Spotify or YouTube. Listen along!

The albums opens with La cumparsita in the style of Aníbal Troilo. I loved the melodic interplay of the violin and cello here. It's a gem!

Morena del 900 is a crispy, swift milonga in the style of Julio de Caro. I did not know the original and will now try to get it, it's great. This cover is even better - I could hardly sit still in my seat while listening to it. It's as if you are prompted by a thousand needles to jump out and start dancing with whoever is around.

Puro apronte comes with a lineage naming Alfredo Gobbi. That's a name we don't hear on milongas very often: he can be hard to understand with your feet. Imagine a distant cousin Pugliese who is somewhere on the autistic spectrum.

I've only changed my opinion recently. This midtempo walker has a somewhat complex arrangement but the Soltangos keep it going with sharp accents throughout. I'd be happy to dance to it.

If Gobbi lies on the boundary of mainstream tango music, the orchestra of Francini-Pontier punched right through it and escaped to the la-la land. Soltangos chose them anyway, for their interpretation of Tigre viejo and two other songs below.

A dancer with no point of reference will kindly imagine Pugliese's cousin again, only this time smoking a crack pipe.

Francini and Pontier made some fabulous danceable recordings with their respective orchestras; together, though, they produced highly intellectual, introspective, nervous music with hardly any dancing potential. Maybe that's why it's nearly impossible to obtain transfers of their recordings in a reasonable technical quality - nobody cared. Which is a pity, because I would love to get good transfers of their collaboration with Podestá, if only to have more Podestá in my library.

Soltangos removed some of the nervousness and replaced it with German precision manufacturing. The cover is technically excellent. I would still sit it out but hats off, the music now really shines.

Zamba para olvidarte is not a tango, as one might guess from the title, but a slow, meditative piece for listening. The band points to the singer Mercedes Sosa as the source of inspiration.

Back to tango. El puntazo brings back the spirit of Juan D'Arienzo and his iconic piece. It's not as angry as the original, more polished, more elegant. Personally, I like my Puntazo more raw, I like it being played with animal, barely restrained energy; I fear this is not a tango for the salon. That said, Soltangos did not miss a beat, every note is where it's supposed to be.

Mala junta has several compelling versions, e.g. Pugliese's. Soltangos chose Salgán's. A regular reader will remember I have expressed great reservations about the legacy of this gentleman. Salgán's arrangement, full of tricky beats, points, and counter-points, was a piece of cake for the cuarteto. It's a joy to listen to, and Salgán himself would be impressed. Whether or not I'd like to dance to it is an open question. I fear it pushes the boundary too far.

The 2nd piece sourced from the catalogue of Francini-Pontier is El tobiano. The version by Soltangos eliminates the problem of the atrocious transfer of the original, and lends itself to pure listening enjoyment - as a concert piece.

Mr. Gobbi's legacy comes into play again with El andariego. If I listened to the original with no prior information, I'd have guessed it came from Pugliese but he actually recorded it twenty years later than Gobbi. This song is not a child's play and will tax the dancer heavily; that said, I feel it has potential. It's full of compressed energy bursting out irregularly but in a controlled fashion. I would have a blast with this cover on the dance floor!

The final gift from the legacy of Francini-Pontier, so to speak, is Si sos brujo. The original is very moving, albeit not immediately danceable, and features beautiful violin solos, played by Mr Francini himself, about a half-way in.

The musicians of the cuarteto are fantastic, and this was candy to them: they play with relish and beat Francini-Pontier at their own game. I loved listening to it, even though my feet remained still.

Desde el alma is fabulous. You've danced to this vals a million times but I bet that never on this arrangement. Yes, Mr. Salgán rears his crazy head again, again to be outdone by the cuarteto.

The cover is a pretty straightforward vals, even with the occasional "strange notes" that give an advance warning that the train might go off the rails eventually. That moment happens at 2.26' with a false ending, after which the tempo goes down a few BPMs and we are treated with what Mr. Salgán really wanted to say all along... a bit crazy but I would say this might work great as the last piece of a late-evening vals tanda.

Julie is inspired by Pugliese's 1958 recording that is in my opinion not especially memorable, relative to his other works of the era. There and here it's a bit dry, intellectual, and without a clear melodic direction, despite it being initially quite compelling. Somehow the game is lost midway in all the virtuosity that we already know the cuarteto (and Pugliese himself) are very much capable of. For dancing, I'd prefer D'Arienzo's take from 1961.

The Soltangos return to the pre-modern era with Coqueta, a sweet melodic walker in the style of Típica Victor. It's a gem, and I thank them profusely for recording it. It brings the same memories that Viejo norte by Sexteto Cristal did. Love it!

I get why bands want to record Salgán, Pugliese, or Piazzolla: it's fun to play when you can play Paganini's capriccios when woken up at 3.30 AM with no prep. Still, if the bands today recorded more Coquetas and forgot the asshole Piazzolla even existed, the world would be a much better place (for milongueros, at least).

El chapucero is a fantastic milona that only D'Arienzo recorded, in 1961, and here it comes again courtesy of the cuarteto.

Clocking over 116 BPM, this is not your gradma's milonga. Which is great, because only the true milonga lovers will remain on the dancefloor, while the faint-of-heart will clear more room for them. I savored Soltango's version even more than the original and would not hesitate dropping it in my sets once everyone is properly warmed up.

Don Agustín Bardi revives the spirit of 1960's Pugliese in a chamber music setting. Decidedly a concert piece, it won't move your feet but will capture your heart instead.

Ojos negros has a special seat in the tango heaven. Consider Di Sarli's take, for example. Or Maderna's. The emotional appeal is direct, uncomplicated.

That cannot be said about Quinteto Real's, which is the point of origin for Soltango's recording. While beautiful on its own merits, it is aimed at the sitting, unmoving audience. I would have loved Soltango's take on the Di Sarli's version better.

Camandulaje puts the spotlight on the 1970s Pugliese, and it's not a pretty sight. I would rate it as the most intellectual, needlessly complicated collection of notes that can still claim the tango tradition. The cuarteto is not at fault here, obviously, this is how Mr. Pugliese intended it. For me at least, it lacks an emotional charge and moved neither my ears not my feet.

Edmundo Rivero recorded Milonga triste in 1976, the year I was born. That means it could possibly make it into my progressive mixes, that is, if it had any dancing beat. Interestingly, that version has a cello in it, which is possibly why the Soltangos covered it. I much prefer their take: the instruments do the singing instead of the aging Rivero, and they do so with conviction and elegance. Having said that, it's well below the normal walking beat at 45 BPM and I suspect that makes it more of a listening affair.

I did not know Sexteto Astillero prior to buying this album, and so I won't comment on how well the cuarteto reinterprets their piece, Chiru. To me it sounds like Piazzolla on speed - fast, virtuoso, dissonant. I found myself out of sight of the intended audience of this style of tango (nuevo).

And now for something I did not expect.

I was bracing myself for another nuevo complication but the cuarteto changed course...

In the final, bonus track of the album, the cuarteto brings the singer Leonel Capitano onboard and together they perform Una vez, a touching, somewhat introspective song Pugliese recorded with Morán in 1946 - and they make it shine, all new and fresh.

It truly is incredible.

They captured the character of the tune, its essence. Importantly, the singer - and I don't know how he does it - sounds remarkably what Morán must have sounded like if you sat in the studio in 1946 and listened to him as they recorded it, without the filter of the inferior recording technology of their time and without suffering the further beatings it took through time and transfers.

This might be the best vocal tango cover I have heard since I started writing this blog in 2018. You will love it, too.

As is my custom, I will now clarify my remarks by reiterating that I am a milonguero first, a fan second, and a reviewer a distant third.

My filter is that of a dancing fan of new tango, and hence I judge the music primarily by how it moves my feet, then my heart.

This should explain my perhaps arrogant remarks about Salgán or Piazolla or Francini-Pontier. Or what I wrote in my reviews of the new albums by Bandonegro and Quinteto Ángel.

I first look at my feet and if they don't move, well, that subtracts a lot of points, if only in my head. Never mind, though - I want to be transparent about it and you are free to make your own choices.

With that caveat out of the way, I will say that the album Misión Tango is a phenomenal achievement and a worthwhile contribution to our living tango tradition. There are numerous songs here that I will happily play for my dancers. As for the rest, it makes for great listening. 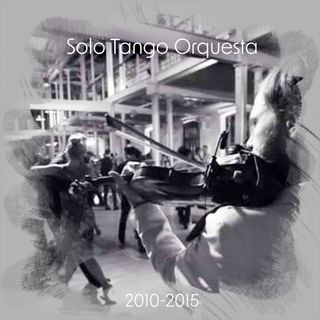 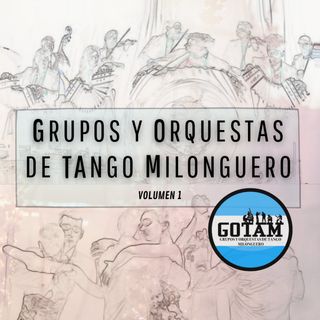