I haven't been to Argentina yet, always postponing the idea until I dance well enough technically to justify the expense. Plus, I really hate long-haul flights in the cattle class. That's why my knowledge of who's who in the contemporary Argentinian band scene is second-hand, limited to what I find on Bandcamp and what gets into my Facebook feed.

This filter is not necessarily without merit: if the band is any good, it would eventually release an album, and I would find it. Still, I am a geek, and I imagine I would be super duper excited if I heard a band that I have never heard of play live for dancers on some BsAs milonga.

That's not going to happen anytime soon, and so Bandcamp it is. And YouTube and other (very definitely anti-)social media.

It was in February that I noticed "Grupos y Orquestas de Tango Milonguero", a new channel on YouTube that premiered with interviews and performances by O.T. Conurbana and Los Herederos del Compás. The program is in Spanish but the producers usually add English subtitles eventually.

The interviews are interesting on their own and a curious visitor can gain unique insights into how contemporary Argentine bands think about their craft and its purpose. That's however peripheral to my own focus here, which is the music itself. It alone can speak for itself. (And yes, I see the irony here as I all I do here is write about music and yes, I feel the impostor syndrome a lot but then again, I am a fan, not a music critic, and that absolves me).

Where was I? Oh yes, the music.

The Grupos released two compilations on Bandcamp and both are worthy of your attention.

Volume 1 (February edition) features eleven different bands, only about half of which I knew. Volume 2 that came out in March added another 11. That's 22 bands! I find that incredible, even though some of the ensembles (like Los Reyes del Tango, Sans Souci) have been around for decades.

I have done review of the better known brands before, and so for the purpose I have here, I will skip over them. If you haven't yet heard Andariega or Sans Souci, browse the Reviews tag! I've got some notes to sell you.

Before listening on, bear in mind that many of the recordings are live, not from studio albums. What they lack in mastering they make up with energy and authenticity. Another caveat: I selected a few songs that spoke to me in the moment. I did not just dismiss the rest and neither should you. What did not move me might move you instead. It's music.

Here are my picks of the bands you may not have heard about yet.

Estrella by Tanguarro is a believable cover of a piece recorded by D'Arienzo with Valdez in 1961. If I counted right, they are just a trio with a singer (I heard the piano, bandoneon, and violin). Quite the guts to go at D'Arienzo with so few guns, and yet they did, and I think they scored.

La noche que te fuiste by Quinteto Bohemia Tango had me thinking it would be an instrumental version, so rich and varied is the arrangement, until the female vocal joined a minute and half later. The cover is very recognizable but not does follow Caló's script slavishly. It's likeable, melodic, danceable from start to finish.

Buscándote is overplayed and as a result, it takes a lot to impress. I found the version by Dramática Tango to be self-sustaining: it does not exploit the lyrical potential of the material as much as I would've liked, doing instead a relaxed, unassuming interpretation that simply pleases you.

Jamás ni nunca by La Juan D'Arienzo sounds like a cover of D'Arienzo but I cannot find that song in the online databases. Could it be a make-believe original? I want to find out!

Entre vias by Pelele Trio sounds like a pot-pourri of several tango classics and is laid-back, slow walker. There's just bandoneon, double bass, and guitar, and so the atmosphere is very informal, casual. I generally like to play at least quartets and prefer fuller ensembles; that said, I'd be happy to mix this one into a "pub" tanda.

Esperando el 24 by Sciamarella sounds also familiar, and yet I can't again find it in the online databases. It's a slower, upbeat piece with a pleasant female vocal. I would like it even better if it were a few BPMs faster :)

Amor y celos by Los Muchachos is a loveable vals cover (hear Lomuto's take) performed by a trio of double bass, guitar, and clarinet. That instrumentation makes it sound like the Balkans and put a smile on my face. If only the band chose a more unique name for itself, not sure if I can pick them out from the lineup on Google. The trio of the same name that I found on Facebook has two guitars and a singer. 🤔

There's a bunch more, and I encourage you to explore the rest of the albums on Bandcamp. I am looking forward to the April editition! 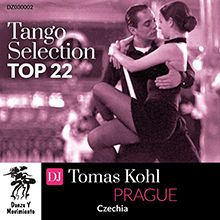 Here is a tango playlist that I created for the music label Danza y Movimiento. It features an opinionated selection of Golden Age music and has a format of a traditional milonga set with tangos, valses, and milongas.

Why I like to go to a pub for tango 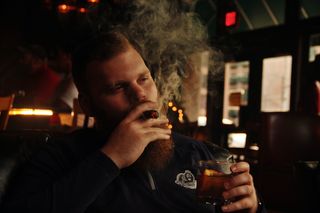 When you say tango, two images pop up competing for my attention. One of them has dancers clothed to impress drinking the Argentine tea and dancing elegantly in a ballroom. Moving with utmost precision and always trying to wow the onlookers. Another captures people in everyday clothes drinking wine and dancing with joyful abandon. Nobody is posing for a shot by the present photographer. The goal is simply to have fun.