A fresh new record arrived to my collection of American-made tango music, the "Guapeando" album by "Cuarteto Tanguero" out of Indiana. Conveniently, it comes with three tandas of music: one in a brisk Troilo instrumental style, another with a lot heavier Pugliese / late Troilo charm, and one with swift and crispy milongas. 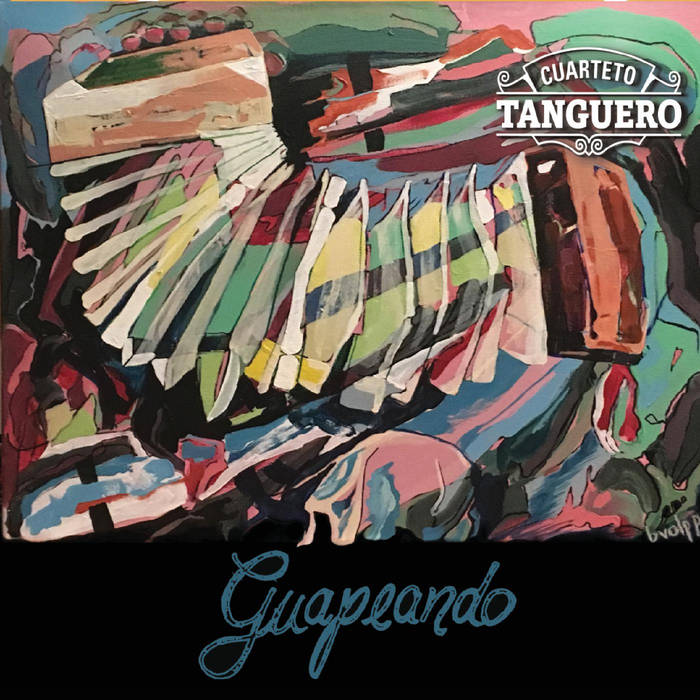 Released in July 2018 on Bandcamp, this is still a novelty at the time of writing.

A notable quality of the recording is its professionality. The band members are classically trained, and it shows.

You might know the joke that a violinist spends half of his life tuning his instrument, and the other half by playing out of tune. Not here. Everything clicks together and for the most part is in-tune.

The danger of professionalism is that a clasically trained musician is accustomed to playing for a sitting audience. I will claim that Cuarteto Tanguero has a dancing participant in mind, although I do not possess the facility for mind-reading: their music inspires me to move.

True, the Pugliese/late Troilo tanda is "difficult". The tempos are changing frequently, and the dancer will have to pay a close attention to the flow of the song. This is particularly so with "Chiqué | El elegante", a beautiful yet challenging rendition.

"Negracha" moves with more regularity and its flow is only occassionally interrupted. The plethora of off-beat accents and syncopes and the resulting energy, which in my estimate has a certain aggresive quality, does require a higher requirement for self-restraint by the dancer.

The opening "Patético" as well as the closing "La yumba" are less introspective and more driven. Given how many "yumbas" we have available, the Cuarteto is in fierce competition here and it isn't obvious to me that they have differentiated themselves in a noticeable way. Importantly for the dancer, their rendition bears a high fidelity to the original, and as such will be a comforting presence.

The milongas that fly

It delights me when a contemporary band "gets" the milonga spirit, both technically and in their expression. The Cuarteto has scored highly.

The tanda is composed of "Mi Buenos Aires | Milonga de hoy", "Ella es así", and "Arrabalera". Given that the first two are the staple of any traditional DJ's repertoire (in their original form from the 1930s), the Cuarteto must be measured against the grand-masters if we are to evaluate their suitability in a DJ set.

Listening to "Ella es así" back-to-back with the Donato's original, I find the Quarteto's version refreshingly new yet respectful. Certainly more so than that by "The Alex Krebs Tango Sextet", which I adore nonetheless.

"Arrabalera" and "Mi Buenos Aires" compare favorably as well. Together, the three form a cohesive tanda in the right milonga tempo around 100 BPM and with the right playful milonga "edge".

Finally, we can dance to a tanda of swift instrumentals that compete head-to-head with the popular Troilo's renditions from 1940s: "Guapeando", "Cordón de oro", "Milongueando en el cuarenta", and "Cachirulo".

The beat clocks at around 68 BPM and the songs share a similar upbeat and energetic quality.

I would have appreciated arrangements that would be less respectful. As they stand, I'd have to think twice before not selecting the Troilo originals. That is, unless I simply wanted to play well-known tango music in great sound quality, which this is to the last note.

Speculating over how can tango music live on in the 21st century, I will propose that traditional arrangements are a "bridge" and that we should demand both new arrangements offering a new look at the old classics as well as completely new music - if we are to belive that tango can indeed live on.

Having said that, this should not be misconstrued as a criticism. I love what Cuarteto Tanguero has done in this album.

Besides the first "difficult" tanda, the rest is usable for dancers at all levels. The tempos are right, and the interpretation triggers the correct impulses to move. I have already included the milongas in my sets and will consider the Cuarteto often when I need an instrumental tanda.