Well, that didn't take long! Last time I day-dreamed that Solo Tango would release their earlier albums, Historias de tango 1-3, on Bandcamp, and here they come! According to the band, it's a selection of the most danceable tracks from these albums, and danceable they are!

I have said this before, and I will say it again: the technical brilliance of Solo Tango is breath-taking. And what makes it even more impressive is that it does not turn them snobbish and there is no navel-gazing: even though they could very well play in the Carnegie Hall, they seem determined to just play for dancers.

To prove my point, I have attempted to organize the contents of this album into tandas, and will present the music as if I was trying to play it live for my dancers.

It does not work 100%, and in the real life I would make more cohesive choices but how often can you do this exercise with a single album?

Since there are 22 tracks on this album, I have limited my comments to the absolute minimum. Which is just as fine: music cannot really be described in words anyway, it has to be heard - and at best, danced.

Let's fire it off with a D'Arienzo tanda.

I have two options to get it started - do I use Felicia or El puntazo?

The fastest Felicia in my library, running ahead at 75 BPM. Surprisingly, it feels like that's the tempo that makes this song prosper.

A dark, iconic track - sounds a little thinner here than I'd find ideal but I think it's got the important elements fused together just right.

Dime mi amor - you won't hear an instrumental version of this very often, in fact this is the first one I've heard and you know what? I did not miss the singer at all. Remarkable. And fast!

Loca - the crazy one, one of those songs that every band covers, sooner or later - it comes out just fine here, has a fantastic drive and won't disappoint, unless you are a curmudgeon. In that I case I can't help you. Sorry.

What do we got for the closer? Dare I say - Este es el Rey? Yes, dare I shall! This tune is easy to overblow and make un-danceable. I think that Solo Tango came very close to the line but did not cross it. It works, you just need to make your steps super minimal and, as always, think about the ronda. Always the ronda!

Having spent a lot of calories on this tanda, let's move on to a calmer one featuring covers of Canaro and Fresedo.

I have to start this one with Poema. It has a long intro featuring a violin solo, and so it really has to be the opener. The solo gives folks some more time to glance around and make some cabeceos, which is a nice bonus.

What you want to hear after this is Invierno. Certainly. And I love the tempo of this version - it sounds like a much better fit and it just naturally leads you to taking a relaxed walk on the dance floor.

Breaking away from Canaro and venturing into the Fresedo territory, we have two more tracks to complete the tanda.

Sueño azul is comfortable and very, very sweet. Too sweet? You be the judge!

Vida mía concludes the tanda. It is overplayed, that's for sure. This one is sugary and super sweet, and if that's your thing, you won't regret dancing to it. To me, this is way too far into the Fresedo style, to which I've developed a strong allergy, but to each his own. It works.

Time for a vals tanda, isn't it? As it happens, there's a milonguera that has a birthday today, and so we'll play a birthday vals - Flor de lino. After that there's a lot of cheers and embraces and maybe, just maybe the dancers won't mind that no more valses are forthcoming as this is the only one on the album.

There is a very long violin intro here as well, after which the song flows in a soft, very pleasant, smile-inducing manner.

The next comes a bastard tanda. No offense to the music intended; here I am grouping tracks that didn't fit anywhere else. Individually, though, they shine. Admittedly, the first three will challenge the leader.

The opener is Mala junta and it is a delight, an absolute gem and my personal favorite of the album. It's full of little surprises and very playful and clever without any pretense.

Los mareados is the least danceable, perhaps the only song for which I would have the most trouble finding a spot in my sets. It's full of modulations, starting in F minor and going through several key changes until it finds a resting point in B minor. Some of these felt a little forced. More importantly to the dancer, there are omnipresent rubatos and the flow is anything but regular. I would say it's a beautiful concert tango, and move on.

Patético drags us back to the dance floor as it is a believable Pugliese cover, played with confidence. It has the signature Pugliese phrasing yet does not go overboard with it.

To finish you off, I conclude the tanda with Quejas de bandoneón. I wonder what was the point of origin for this arrangement? It flows 1 BPM below the normal walking tempo, first exposing the dramatic theme in a somewhat understated way, then building a clear narrative and gradually increasing the intensity. I loved the decisive resolution.

The next tanda is mixed again, this time combining several traditions but nevertheless unmistakably Solo Tango. The tempos are high, preparing us for the milongas to follow.

The interpretation of El huracán sounds like something D'Arienzo would have recorded in the 1970s: super fast, racing at 70 BPM. Ultrasharp staccatos and plenty of fun.

The next two are straight Troilo. Fast, instantly recognizable, guaranteed to speed up the ronda.

How about Milongueando en el '40? Yes, please. If I were to be nit-picky, I would love this arrangement to be more elaborate; there are too many unison passages here. Will the dancers mind? I don't think so.

Troilo did not record Canaro en París but many others did, including Canaro himself as well as D'Arienzo - three times. The tempos here are borderline crazy at 73 BPM but the phrasing should help the leader keep it short and sweet. I would have fun with this one.

Time for some milongas, finally! And the faster the better, if you ask me. In this regard, Solo Tango delivers.

I would play No hay tierra como la mía as the opener. The tempo is 110 BPM, which should not scare the leaders, hopefully.

The beats go up to 119 BPM in Milonga sentimental. Whoever is on the dance floor, that's it, we ain't getting more couples involved. Although I could be wrong, it's fast and a lot of fun!

If you thought I wouldn't go any faster in this tanda, you would be wrong. I give you Mano brava, a true milonga delight. At 124 BPM it's not the fastest milonga in my collection, however - that honor goes to La puñalada by Los Reyes del Tango who managed to clock the record-breaking 134 BPM. Still, it's way faster than I would be comfortable risking on a normal milonga. Here, though, I can do whatever I want.

It's time to send people home with La cumparsita. It's very rare that I don't play the Cumparsita at the end of my sets. I know some DJs hate it and do not play it, and to them I say: fuck you! The Cumparsita is a must in my world and as a dancer, I would be supremely pissed if I were sent home without it.

Solo Tango plays it very swift, maybe too swift if it were supposed to be the last song of the evening. I prefer Cumparsitas that calm me down such that I accept that the milonga is over. That said, it is convincing and technically superb, as always.

If you've come this far, there's a good chance you are a Solo Tango fan as am I.

These guys are incredible, and there no difference between a studio track they record and a live performance they give on stage. None. They should go over to Argentina and teach there.

All in all, this album gives me plenty of new ammo for my sets, and totally made my day.

And what's even more exciting, I heard rumors - from an insider - that a new album might, just might be on the horizon! Would that make this blog a Solo Tango fanclub? It's a distinct possibility.

Hello, thanks for your review about their new album.

Could you share any idea of what happened to their older albums?
Thanks for your share of ideas about tango musics again.

Hi, their older albums are very hard to find nowadays. One might get lucky and find a used CD. But I got in touch with them and this compilation is supposedly the best danceable music from that period of the orchestra, and so maybe you don't need all the early albums anyways. 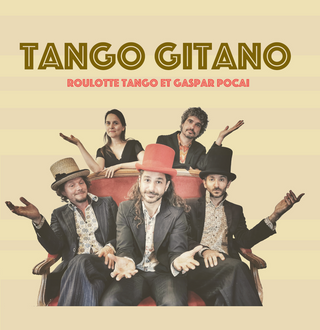 Tango Gitano brings the smaller version of Roulotte to the stage, and maybe the expansive orchestral sound of "El Siguiente" and "Muñeca mecánica" is never coming back. Rather than do covers, this time they deliver a fresh batch of tangos penned by the band-leader Gaspar Pocai. 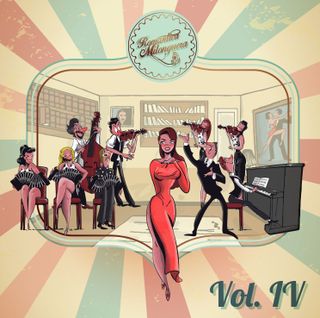 Oh my! I've lost hope I'd see another tango release until the end of this God-forsaken year, and here comes Romantica Milonguera to cheer me up! Let's have a listen.