At a recent DJ seminar I held, my revelation that I use harmonic mixing when composing a tanda has raised a few eyebrows.

What is harmonic mixing?

Wikipedia tells us that electronic dance music (EDM) DJs use it to transition between songs that are in the same key (e.g. A-minor).

Tango DJs don't blend songs together in a continuous stream. There has to be a clear space between the songs. In this space the previous song is laid to rest and the couple prepares for the next one.

In the context of tango DJing, harmonic mixing is using your knowledge of keys to create harmonic contrast between two adjacent songs within a tanda.

The tanda should progress in an arc from one song to another, each connected yet distinct from one another. Hence the effect that EDM DJs want - make the transition undetectable - is undesirable here.

How a change of key creates contrast

You can look at a key as a framework within which a piece of music operates. The key tells you how the notes and chords you hear are related to one another. Since the tango music is rooted in the Western musical tradition, it inherits from harmony developed by composers in the preceding hundreds of years.

It follows that if two songs are written in the same key, they share the same "notes", or rather chords and chord progressions; that is why there can't be any harmonic contrast between them.

Let's look at a few examples.

Listen to "No ensartamos ni una" by Canaro with Famá, 1934 (beginning and end, about 50 seconds):

Placing them back-to-back would not work for me. Both start in the D-major key and there's not enough other contrast in the musical expression.

How about going from a major key to its minor variant?
"Rosa de sangre" by Canaro with Famá, 1934 (first ~50 seconds):

The key of the opening theme is D-minor, parallel to D-major. Since we associate major keys with a "happy" mood and minor keys with a "sad" one, there's some contrast. But wait - Canaro then switches to D-major for the alternating theme, and we're back in the mood of the previous song.

It's repetitive. And in the worst case, the dancers might suspect you've made a mistake and are playing the same song twice!

Considering what to play after "No ensartamos ni una" from our first example (listen to it again briefly), I will therefore look for a song in a different key.

There are several patters I use. One that I noticed falling back to regularly is looking for a key that is a perfect fifth below. Placing the pinky finger at the D key of a piano, briefly touch the neighboring white keys with your other fingers until your thumb arrives at G.

The key is G-minor. Besides the harmonic contrast we also have a change in mood, which might also be useful. The tempos are the same at around 60 BPM (normal walking beat) and the grounded, staccato character of the themes provide the musical glue that we need to hold the tanda together.

If I wanted to switch to a minor key, I could also look for a song in F-sharp minor, related to D-major by a major third above.

The harmonic contrast is clear and consonant and when Canaro introduces the alternating theme, we end up in A-major, which is related to D-major by a perfect fifth. Contrasting yet very pleasant.

Another tempting pattern is to look for the relative key. If the first song were to be in G-major, the relative would be E-minor. The relativity we speak about here is that both keys have the same signature. They are both related yet contrasting, which is a quality we can exploit to our advangate to build a coherent tanda.

I like the transition. It is harmonious and elegant. In fact, alternating relative keys within a song is a common pattern in tango songs. The main theme would open in C-major (upbeat) and the alternating theme would be in A-minor (lyrical).

It's possible to over-engineer this, and I am not going to. Suffice to say, any difference in key will provide some harmonic contrast. Plus, some transitions are more pleasant than others, and you can rely on your ear to guide you.

Using keys in my workflow

Why bother with analyzing the keys at all, you might object, if you can just as well go with your ear?

Having tagged all songs in my library such that the key is the first item in the Comment tag, looking at the key when composing a tanda saves me time. This is all the more valuable while improvising on the fly.

Say I want to play some Di Sarli with Rufino. This is what I'll see in my library: 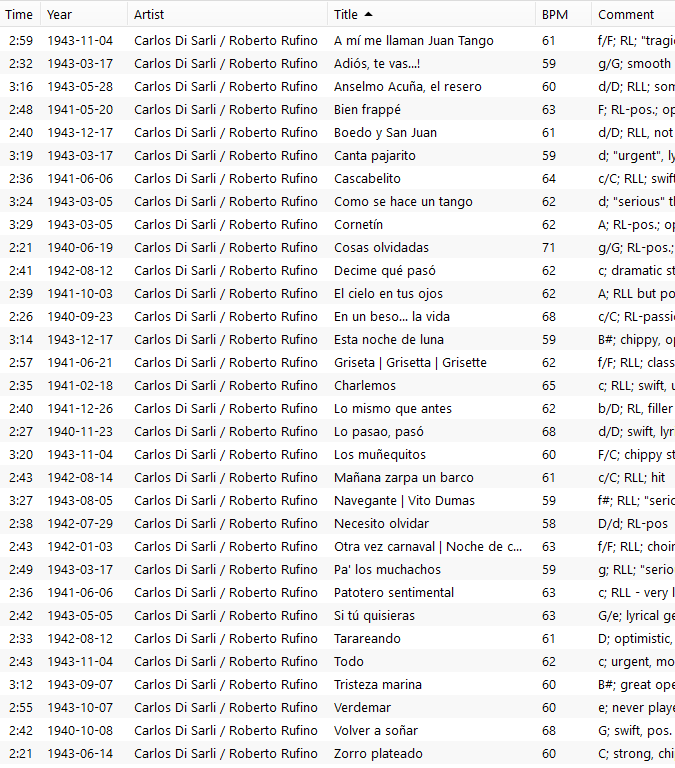 There are a few technical characteristics of the songs that will me while I explore songs to pick: BPM and key come first in this case since the artist, genre, and decade filters have already been applied.

At a glance I see which songs begin and end in what key(s) and whether they are predominantly lyrical or upbeat (or alternating moods). Given the constraint that I don't want two songs in the same key next to each other, my field of options narrows, and that is a good thing.

Let's say I want to open with Patotero sentimental and include Cascabelito as well. Instantly I see that the key is the same: C-minor. I can't put them together.

I scan the list and spot Bien frappé. Ah! The key is F-major, that could work. Reminding myself in a quick pre-listening session how it sounds, I test how well would Cascabelito follow. Serious and lyrical like Patotero, we've gone back to the spirit of the opening tune and the key is again C-minor.

For the ending, I choose El cielo en tus ojos, which runs in A-major. The change mood is supported by the change in key, and I rely on phrasing and musical expression commonalities for the glue.

On to the hard part. How do you find the key if you don't have musical training?

The practice I recommend involves your favorite music playback software and either a physical or virtual piano. One that I use is called Javascript Piano.

I start playback and watch for the end of a phrase. It's a moment when the music seems to "rest", and is then followed by another phrase. These resting moments are almost always on the tonic of the key you want to find.

For instance, when a song is in C-major, you'll hear the chord C+E+G, and the double bass will play the note C.

Not knowing which key is used, I hit the virtual keyboard until I find the note that resonates the most with what I hear in that resting moment.

An important caveat is that neither the instruments leading the melody (e.g. violin) nor the singer might finish the phrase on the root of the tonic chord (C in C-major). They might end on the third or fifth (E or G). The double bass is your best bet - the lowest, deepest tone tells the truth.

Harmonic mixing has been a tool I've used since I got started DJing about seven years ago.

It feels natural to me as I studied music performance as a child and young adult. All tonal classical music is based on keys and their relationships.

My view that keys can help me create a natural contrast between songs, and it's possible that you can use them the same way without being technically aware of it. And that's fine.

In the end, all that counts is how the music moves the dancers at a milonga. I wouldn't be surprised if another DJ showed me a tanda of four songs in the same key that worked wonders. Musical intuition beats dry theorizing every time.

How I mix vals tandas

Your humble DJ set out to mix vals tandas out of different orchestras, and you won't believe what happened next 😉